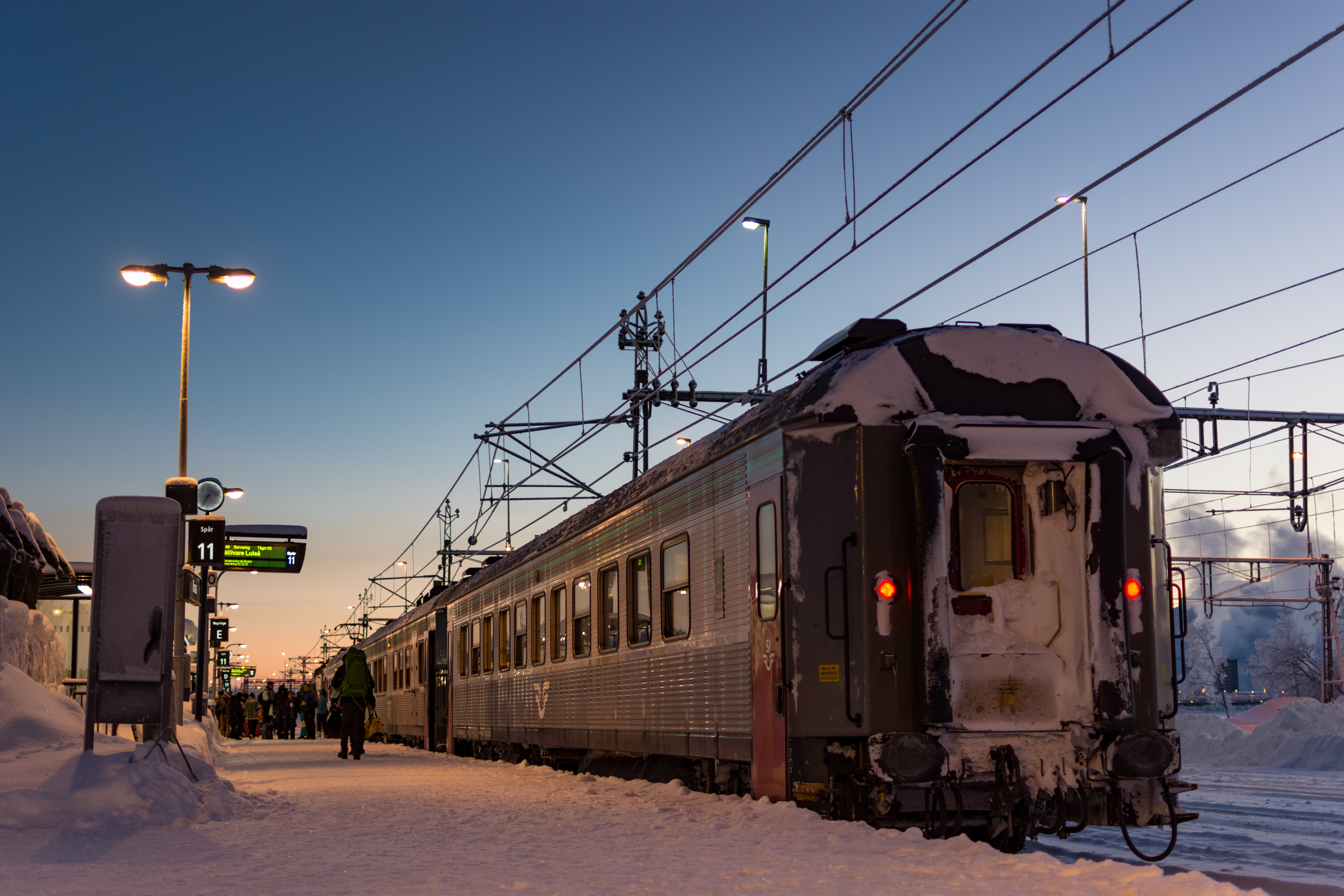 The train ride between Stockholm, Sweden and Narvik, Norway is a comfortable, hassle-free environmentally-friendly way of enjoying the beauty of Europe’s Arctic north.

The train begins its journey around six in the evening from Stockholm’s Central Station. You will not have to pass through security or show your passport.

Stockholm, Sweden’s capital, is a scenic in cosmopolitan city with over 2 million inhabitants. Stockholm lies on the same latitude as St Petersburg in Russia, so you can expect cold winters and warm summers. Stockholm, often referred to as the Venice of the north is a beautiful city, situated in in the centre of an archipelago that stretches out into the Baltic sea. The city is well worth a visit, but if are coming from abroad and are intent on heading straight to the Arctic region, you can embark at the train’s first stop, Arlanda Airport.

If you have booked a first class ticket, you will be provided with a two bed compartment. Your bed will be ready made with a pillow, duvet and bed sheets. You will also have an ensuite shower which with towels and soap. We really recommend this option for couples on a romantic break, as this compartment cannot be booked by anyone else. Breakfast is provided and you can access the SJ Lounge in Stockholm with your ticket. You cabin will have a window with curtains, so you can enjoy the stunning views when you wake up.

You can book a ticket in either a three-person sleeping cabin or a six-person couchette.

The three-person sleeping cabin, contains three ready made beds. If everyone in the cabin agrees to it, you can pull out the middle bunk and form a sofa. There are no mixed cabins.

The six-person cabin, feels a lot more communal, and we would only recommend this option if you are comfortable sleeping in a cabin with five strangers. Remember there are twenty-eight stops, so there will likely people joining the party later in the night! This is an excellent option if you are a group of people travelling. If you are less that six people, SJ will offer you a reduced rate for the remaining beds. It is common for groups of skiers, to chose this option when travelling to the ski resorts in Northern Sweden.

With both the second-class options you will be given access to a communal shower and toilet. We do not mean everyone will be in there at the same time, despite what stereotypes of the Swedes might have you believe! We do advice that you take a shower when you wake up however, as a queue can build up towards the last leg of the journey.

If you are travelling to Narvik in wintertime then you can expect to enjoy between five-six hours of daylight. When you embark at Stockholm, it will already be dark, so you won’t see daylight until around 6-7 the next day. Fortunately, the train will pass through the more dramatic landscapes during the final hours, so you won’t miss everything while you sleep.

Of course if you are travelling during the summer, you can expect only a couple of hours of darkness, so it will be possible to watch the sunrise and sunset from your cabin window.

When you wake up you will be approaching the rounded mountains of Sweden’s north. The train will begin to snake its way around the elevated terrain and you will be able to take in some spectacular views. If people are still sleeping in your cabin, then make your way to the bistro, grab a coffee and enjoy.

After you have passed Kiruna, seven stops before Narvik, the train will be left with mainly tourists and skiers. There are a number of mines in Northern Sweden and workers often take use the train as a convenient way to reach these remote locations. This means that you can probably open the curtains in the six-person cabin and enjoy the views from your bed.

You can book your trip here: https://www.sj.se/en/about/about-sj/our-trains/sj-night-train.html (we are not affiliated with SJ)