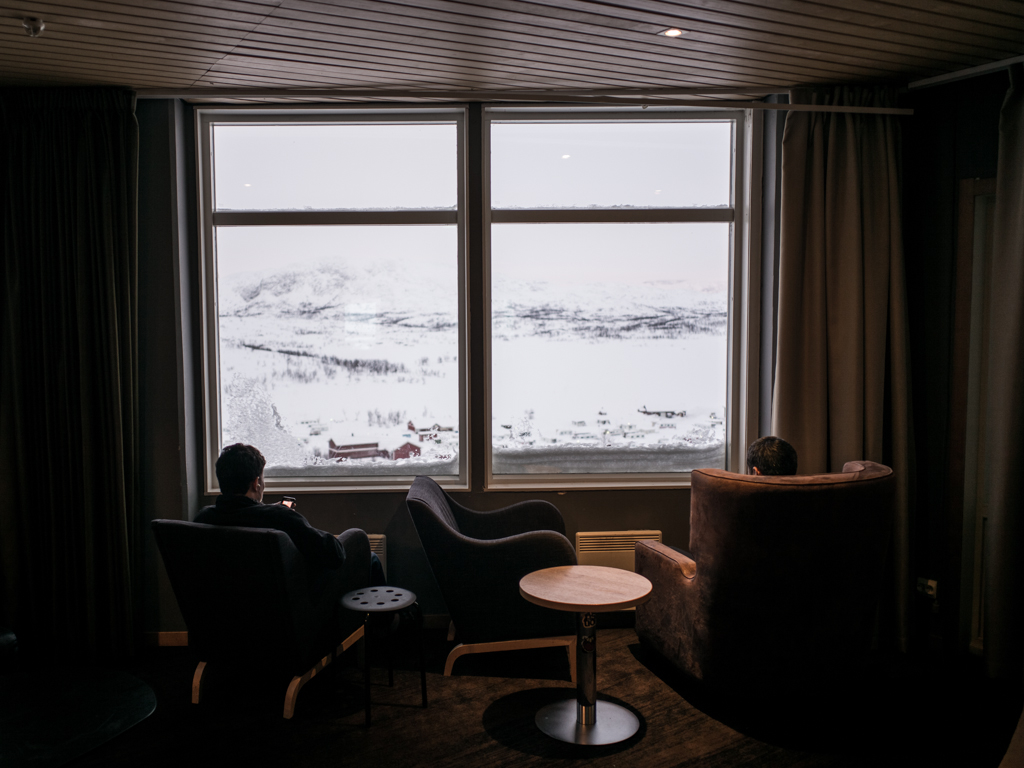 Inside a Ski Resort for Refugees

During the winter of 2015/16, a small village, with a population of 40 and situated deep in Swedish Lapland become a temporary home to six hundred refugees. Pascal Vossen and Nils Adler visited Riksgränsen in February 2016.

Children swing from a flimsy steel mesh, designed to separate the hotel’s reception staff from its temporary inhabitants. Three cherubic faces peer through an opening: behind them, a drawing reads ‘Riksgränsen-Beautiful Days, Remain a Memory’.

The children ask Michaela, a member of the hotel staff, how to say particular phrases in English. She has learnt Arabic in her 3 months at Riksgränsen and patiently translates their phrases. The plastic mesh throws shadows across the foyer and over a group of Afghan men deep in discussion. Beside them sit two men hunched over a small table engrossed in a game of chess, they barely react as a child careers out of reception on a scooter.

This temporary Arctic refugee centre, situated in the northernmost municipality of Sweden, is a place of contrast. An eclectic mix of language, ethnicities, cultures, beliefs and socio-economic backgrounds. This mix of people have formed a close-knit community; one family is what you hear many residents call it. The phrase is included in a unique logo that has been created by the refugees at Riksgränsen and printed onto polo tops. The logo consists of a Swedish flag, alongside the flags of all the nationalities housed in the ski resort.

‘Since people have started going, it feels like I am losing my family – Ali

Ali, 31, used to have his own radio channel in Iraq and is quick to show us a picture of his old recording suite. Another photo shows him at a political demonstration, an indication of why he felt he needed to leave. ‘Everyone has acted as a form of family, the staff, the other refugees and the teachers’ Ali tells us. The migration office can only confirm placements 24 hours before departure, but they have indicated to Ali that he may be transferred to Finland. He expresses sadness at having to leave, ‘since people have started going, it feels like I am losing my family’. Ali supports his broken English with body language and pictures on his phone. Ali, like many at the hotel, is determined to speak Swedish or English rather than rely on a translator. He smiles as he recounts how a Syrian couple met and got married at the hotel “the party was crazy, the staff had never seen such an event and celebrated with us the whole night’.

The February weather is unseasonably mild, fluctuating between -15 and -10 degrees; the children, now veterans of the harshest of winters, bask in the relative warmth, wearing long-sleeved t-shirts as they play in the snow.

Inside the hotel, Moaz, from Salma in Syria, is watching Brooklyn, a romantic drama, on his phone. He is fluent in English and spends most of the day translating for people. Today’s duties include: helping people with their Migration slips, notifying them of where they will be taken by bus the next morning and working with a Farsi translator in overseeing his brother’s haircut by the resident Iranian Barber, Mehdi.

The need for translators is representative of the many cultural differences that exist within the group. ‘I have many Swedish friends, I spent Christmas with my friends in Kiruna (2 hrs south) and attended many parties; I understand the Swedes more than I do the Arabian or Asian People’. Moaz is quick to draw on how they are presented in the media, ‘we are very different, for example, there were around 100 Sudanese people when I arrived, I mean I had no idea about this country!’ The congruous spirit and harmonious atmosphere took time to develop, and at first, there were some teething problems. The weather was a challenge, and Moaz had to translate for many of the doctors; he describes severe skin diseases that developed from exposure to the-40 degrees, dry cold. The majority of residents had been sent on the 2,000 km journey from Malmö less than 24 hours after arriving in Sweden and were not prepared for the climate. ‘There are always some issues when you have this amount of people arriving, but now it is good. On TV you always see problems but in reality, we only saw solutions’ Moaz explains.

Moaz and his brother, Maed, have both had work permits accepted and will be employed by the hotel when Ski season arrives in late February. However, for many of the refugee’s working is a matter of pride and something to keep them busy. They work voluntarily as chefs, teachers, translators, hairdressers, musicians and gym instructors. The question: what do you plan to do now when you are relocated? eventually becomes redundant, the answers are all the same, ‘First learn Swedish, then work’.

For the children, the hotel is an oversized playground. The steel mesh at reception has become a climbing frame, the foyer a racing track and Jimmy, the hotel’s handyman, a six-foot climbing frame. Michaela admits, ‘they are so frustrating, they just climb everywhere, but how can you be angry with them, just look at them’ she squeezes the cheeks of one of the smiling children who hugs her back.

There is one place where the children behave, and that is the classroom. Moaz slows as he nears the makeshift school, you can sense trepidation from the group who are showing us to the classroom; he points at a stern-looking teacher, called Gunn Britt, and turns back down the staircase. The room, designed for conferences, contains a mock wooden cabin and several old maps hang on the wall. A child sheepishly, spits out some chewing gum into the bin Gunn Britt has thrust at him, and the class commences. The classes are smaller than a month before, and now there is roughly one teacher to every child, with a couple of children receiving private tuition.

The teachers are from the city of Kiruna and lodge during the week at the hotel. They have created an ad-hoc syllabus out of photocopied textbooks. Teaching Swedish was a challenge as they had no texts that showed translations from Arabic or Farsi.

Standing a foot above the children is Abbas; he is 22 and determined to learn Swedish, so he joined every class he could, including all the children’s classes. He was an engineer in Afghanistan and has heard that you can study mining at Luleå University, also in the north of Sweden. Anita, one of the teachers, describes how she has never seen such a high level of motivation from such young children (between 5-12) ‘I have never met most of their parents, but the children come here every day by themselves and just want to learn’. It becomes obvious that there is an air of melancholy as the class nears its end, the numbers are already depleted, and next week all the children will have been placed elsewhere in Sweden.

‘I have never met most of their parents, but the children come here every day by themselves and just want to learn’ – Anita

The gym is crowded, it is no more than 30 sqm and certainly not designed to be a focal point of the hotel. However busy the gym is, a wide berth is always awarded to Mahmud, a decorated bodybuilder in his native Egypt. He loads every weight he can find in the gym onto the leg press, leaving his friend with only a bar, and with his Havaiana flip-flops squelching under pressure completes a few lifts before being distracted by his phone.

Many of the men have kept themselves busy by exercising. As we talk with them, it becomes evident that the gym’s popularity may be more relief from boredom than a genuine pursuit of fitness. Mohammed, 19, from Babylon in Iraq, uses the gym to keep himself occupied. He is happy in Riksgränsen, but he is getting restless and tells us he is eager to find somewhere to study Medicine; his father who is using the bicycle machine behind him, nods approvingly.

The boredom is palpable during the day. People sit in corridors, surfing the internet on their smartphones, often the same devices that had guided them across Europe. Mohammad, 28, from Mosul in Iraq, has enjoyed his stay, but now with many of his friends leaving, he wants to join his girlfriend in Stockholm. He dismisses the possibility of moving right now with a flick of the wrist; ‘I have read the news, Stockholm is not good right now, we hear there are many problems’. He leans in and asks us ‘you live in Stockholm, is it this bad?’ With 163,000 asylum applications in 2015 public opinion over the refugee crisis had become increasingly polarised. Mohammed and his friends are happy to stay in the north of Sweden for now.

Zakera apologises profusely for not being able to provide us with chocolates. Her family’s journey from Afghanistan was a treacherous one; the overcrowded boat they took between Turkey and Greece ran out of petrol. Stranded at sea, they had to be rescued by the coastguard. She hopes to move to Stockholm and asks about the culture and what the shops are like. Mahdi is amused by his wife’s questions, ‘we are fascinated by the differences here, Swedish people are very kind but things like marriage are very different’.

There is a bang at the door, startling everyone but their young son, who is fixated on his phone. Two representatives from the Swedish migration office are here to tell them they will be leaving the next day for new housing. Neighbours come in and general confusion ensues, Zakera looks to her husband in nervous excitement, their son completes a level on his game and joins them in the corridor. They are to be placed in Torpshammar which no-one, including the Migration officers, has heard of.

After the officers leave, we look at Torpshammer on the map, it is 1,000 km south of Riksgränsen, that means, for Zakera, 1,000 km closer to Stockholm. For many families like theirs, this will be their last placement. Perhaps sensing the importance of the situation, their son leaves them to digest the news, he takes their neighbour’s hand, and referring to him as ‘uncle’ he instructs him that they are to play.

Housing refugees in Riksgränsen would never have happened if Sweden had been prepared for the number of refugees that have arrived since this crisis began. There was not enough housing available; sports halls, camping sites and student accommodation have all been utilised as a temporary solution. The decision to house these 600 refugees in the most remote area of Sweden was as resourceful as it was desperate. As the four-month contract ends, it is hard to see this emergency measure as anything other than an unprecedented success. In this remote Arctic landscape, these refugees have been able to acclimatise in a calm and secure environment. As we wait for our night train back to Stockholm, Moaz tells us why he wants to stay in Riksgränsen, quoting a Swedish priest who has befriended him ‘when you have found good people, you have found a good place’.