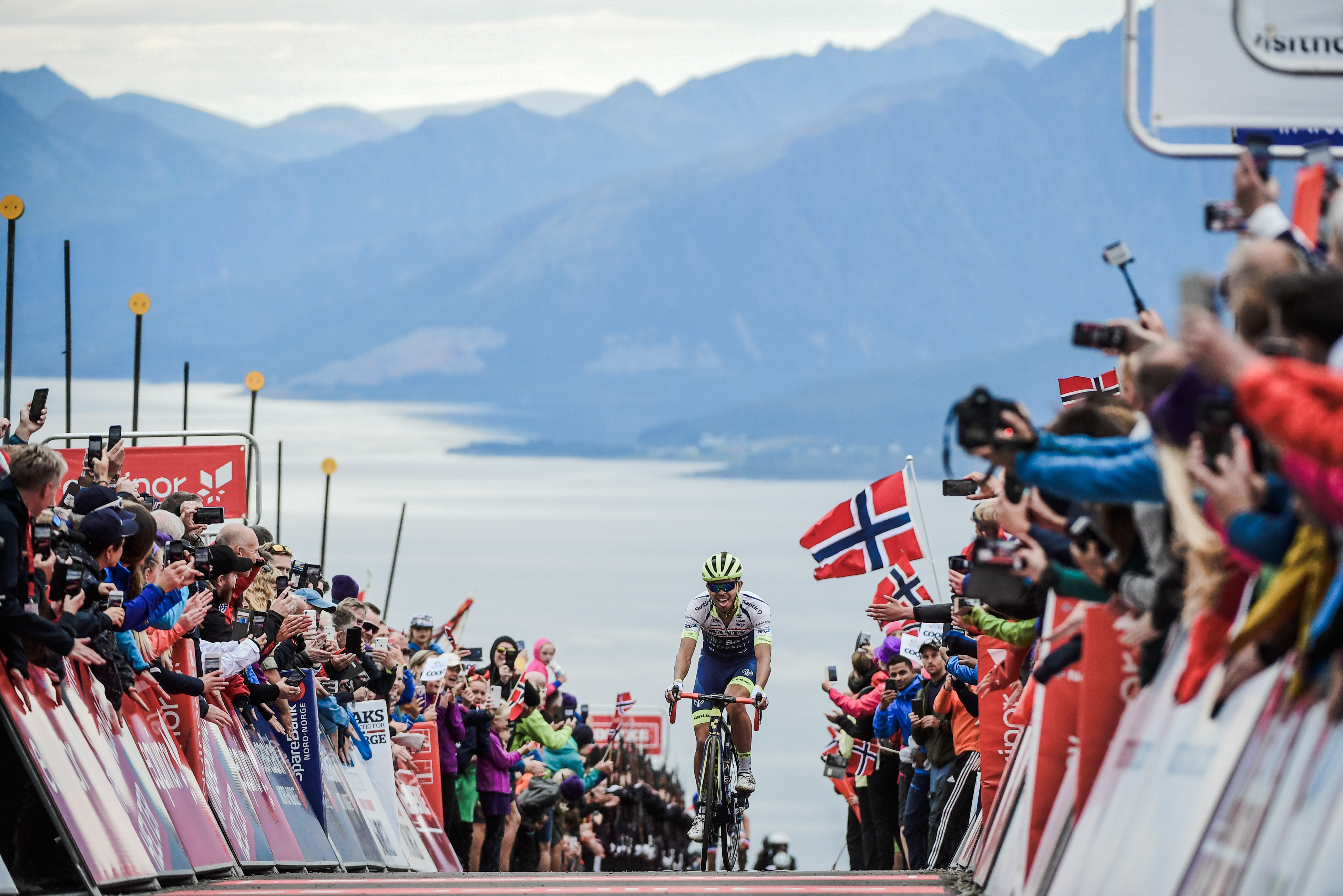 The Arctic Race of Norway is the northernmost professional bike race in the world. The multi-day trip has been held since 2013. It is not only of great importance for Norwegian cycling, but also for the country and its people.

Kjøllefjord is ready for the big festival. The colourful, typically Scandinavian wooden houses are festively decorated; Norwegian flags line the streets as people flock in droves towards the otherwise sleepy town centre. Crowds gather around the point where the town hall, post office and a specialty shop for fishing accessories converge. Barriers have been set up, a large target banner, stages and even several video screens. The small fishing village has been preparing for this day for weeks – and now it’s time for it to shine.

Not much happens here, around a thousand kilometres north of the Arctic Circle, where winters are long and dark and summers are short. Only 950 people live in Kjøllefjord, which is one of the northernmost places on the Norwegian mainland and is only a three-hour boat trip from the famous Nordkapp. Most of the inhabitants work in fishing, reindeer herding or seasonal tourism when the well-known Hurtigruten ships dock in the harbour. If you want to visit Kjøllefjord by land, only one road leads to the coastal village, which is sandwiched between huge granite rocks and the cold ocean. The next settlement after Mehamn is almost 40 kilometres away. In between: a virtually untouched, rugged rocky landscape that is only inhabited by thousands of reindeer.

Kjøllefjord marks end of the second stage of the professional bike race, which since its foundation in 2013 has developed into one of the largest sporting events in the north. Even Norway’s Prime Minister Erna Solberg is expected to arrive in Kjøllefjord by the afternoon. “That is exactly what is unique about our race. We also visit small towns in our region every year, ”says Knut-Eirik Dybdal. He is the managing director of the Arctic Race, which is organised by the creators of the Tour de France.

A flagship for the entire region

A professional bike race, a thousand kilometres north of the Arctic Circle – it was not easy to get here, admits Dybdal, the man who came up with the idea of an Arctic race. The race was conceived during the early 2000s when Norwegian cycling was experiencing an unprecedented upswing. It was a period when Kurt Asle Arvesen, Thor Hushovd, and later Edvald Boasson Hagen and Alexander Kristoff – Norwegian cycling professionals began to establish themselves as some of the best cyclists in the world producing some sensational performances at the Tour de France. At the time, the Tour des Fjords and the Tour of Norway were the two professional stage races in the country. Meanwhile the north – with its harsh weather conditions was not considered a viable cycling region.

This has been an issue that Nord-Norge, the Norwegian term for Northern Norway, has had to contend with throughout its history. Out of more than the 100 major sporting events held in Norway since the Second World War, only one took place in the northern third of the country: the 1990 Speed ​​Skating Sprint World Championship in Tromsø. “We tried to get the Olympic Games and a European Football Championship together with Sweden – but that didn’t work out because, among other things, the necessary sports cities in our sparsely populated region would not have been used afterwards,” explains the race director. A bicycle race for him is the perfect solution to the problem: “You don’t have to build stadiums – the streets already exist. In addition, a stage race offers the opportunity to bridge the large distances between the places here, to show our great landscape and to bring people together. Kjøllefjord is the best example, ”said Dybdal.

On the day of the race almost every inhabitant of the small fishing village is on their feet. Long before the arrival of any cyclists, people gather around the video screens in the town centre to follow the race as it meanders through the Arctic landscape. Many of the Sami living in this region wear their colourful costumes for the festive occasion. There is also a barbecue on the wooden terraces and over 100 children race for bets at the Mini Arctic Race in the town centre. Even if cycling does not play a significant role in the everyday lives of Kjøllefjord’s inhabitants, today the village lives and breathes the sport.

It is the North’s enthusiasm for the sport that enabled Knut-Eirik Dybdal to convince the organisers of the 2011 Tour de France that this could work. It was also the year that Norwegian cycling was at an all time high; with Thor Hushovd donning the world champion’s rainbow jersey, as he won two stages at the Tour de France. Hushvod is also an integral part of the Arctic Race’s history. Dybdal remembers his first phone call with Hushvod with a smile: “I told Thor about our idea of bringing the best cyclists in the world to Northern Norway. He probably thought I was crazy. But he still supported us. ” The Norwegian cycling legend would go on to win the first edition of the Arctic Race in 2013. He is now the race’s official brand ambassador.

Today, Hushovd is attending the race in Kjøllefjord as a spectator. Children ask him for autographs and selfies, he patiently answers the reporter’s questions. “The region here is certainly one of the most beautiful areas in the world – for this reason alone, the Arctic Race is a very special bike race. And there is also the enthusiasm of the people which gives the race a family-friendly feel, ”he explains. A total of eight teams from this year’s Tour de France tackle the four stages from Kirkenes to Alta. Among them are the French mountain king Warren Barguil, the Olympic gold medalist Jakob Fuglsang and the cycling cross world champion Mathieu Van der Poel.

A platform for Norway’s talent

The Norwegian cyclists are just as important for the local fans as the global stars. Local hero August Jensen in particular – who has so far been the only cyclist from the north to go professional – is the main focus of interest. The 26-year-old has participated in all six editions of the Arctic Race of Norway so far and, despite strong competition, was stage winner and second overall last year. Jensen is a symbol of what makes this stage race so special for Norwegians. For the local cycling professionals, it is one of the best opportunities to demonstrate their talent on the international stage. “When I was young, there was none of that – neither a race nor a professional from our region,” explains Jensen.

In Kjøllefjord, many of the spectators are willing him on. But unfortunately it is not his year. The day before, during the opening phase, a tire defect in the finals costs him valuable time. On the way to Kjøllefjord he has been in the favourites group for a long time, but a sudden gust of wind brings him down and he has to bury all hopes for a top position. A disappointed murmur ripples through the rows of spectators when Jensen is shown on the video screen with his tattered jersey. However, the mood quickly rises again – especially when the sounds of the TV helicopter can be heard over the fjord and the final stage begins.

Over the course of the 195 kilometres, the race has developed into one of the most exciting in the competition’s history: splintering into small groups, the peloton chases the finish line down into the fjord – as the stormy, cloud-covered weather adds to the atmosphere. In the end it is the American, Colin Joyce, who wins the final sprint . Third place goes to young Norwegian professional Markus Hoelgaard. For Hoelgaard, who ultimately won the Arctic Race 2018 young talent ranking, it is one of his best moments in his career. “We’re racing against some of the strongest teams in the world. It is one of the most important races of the year for us, ”he says happily at the finish. Norway’s Prime Minister Erna Solberg also arrived in time for the final. “This race is incredibly important for the north”, she states in front of the audience before referring to the promotional aspect the race has for the region: “The Arctic Race generates a lot of interest and, thanks to the fantastic pictures, makes our beautiful Norwegian landscape known to the whole world. “

The race undoubtedly serves as picture-postcard for the unique nature of the north – with northern lights, fjords cut deep into the granite cliffs and wide plains with roaming reindeer. A platform for Norwegian riders to showcase their talents. And a project that made the dream of hosting a major sporting event north of the Arctic Circle a reality in Northern Norway. With the race broadcasted in 160 countries, the creators of the Arctic Race of Norway can be content in the fact that it is has been a rip roaring success. But they are still not satisfied: in the future, race director Knut-Eirik Dybdal dreams of staging a race on the polar island of Spitsbergen, one of the northernmost inhabited areas in the world. “We are extremely enthusiastic here. We can, and want to, push the limits, ”says Dybdal. Having witnessed the enthusiasm for the race in the tranquil Kjøllefjord, it is hard not to believe him.